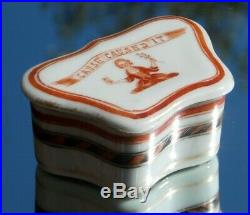 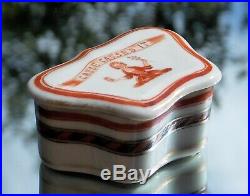 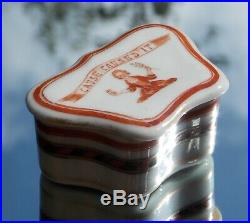 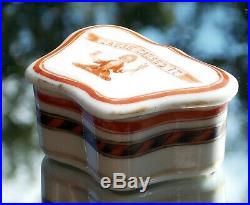 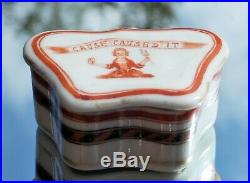 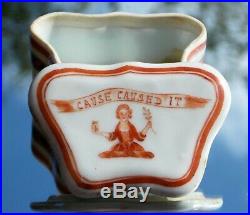 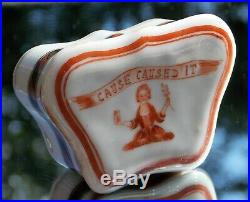 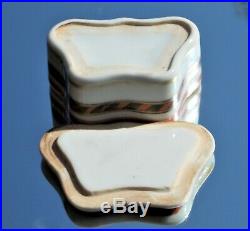 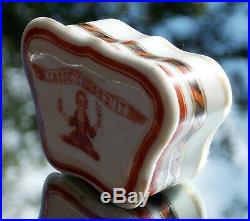 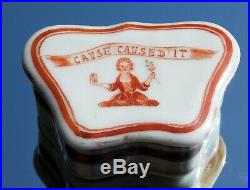 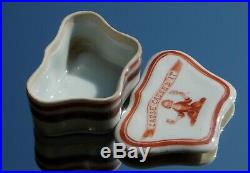 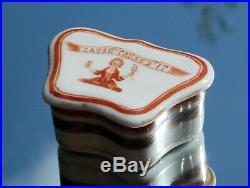 RARE ANTIQUE CHINESE ARMORIAL SCOTTISH CLAN ELPHINSTONE SNUFF BOX. A lady, from the waist upwards, richly habited in red, her arms extended, the right hand supporting a tower and the left holding a branch of laurel, all Proper. Motto: Cause Causit which has been hand painted in a scrol banner above reading (Cause caused it). This is then framed with a hand painted red border and a gilt gold border though the gilt has rubbed, the body of the snuff box is again serpentine in shape with a two colour banding and this has above another hand painted red band these run around the body, the bottom edge of the body has a hand painted gold gilt border which has rubbed over the years , the quality is wonderful, this would have been ordered by the family themselves many many years ago, its very special, the condition apart from a little rubbing to the gold gilt banding is excellent with no chips or cracks, my photos dont do it justice. Origins of the Name. The surname Elphinstone is derived from the territory of Elphinstone in the parish of Tranent, meaning of Elphinstone. The original people of this name are believed to have been known as de Erth. Later still they were known as Elfinstun. The people of the Clan Elphinstone are believed to have originated from the lands of Airth in Stirlingshire. They were called de Erths and erected a castle nearby and through marriage inherited lands near Tranent in East Lothian. These lands came to be known as Elphinstone. Deeds dating from 1235 from this area bear the name de Elfinstun and grants dating from 1250 record the name John de Elphinstone as a witness. Sir John Elfinstun married Margarot Seton of Clan Seton she was also the niece of King Robert I of Scotland also well known as Sir Robert the Bruce. A descendant, William Elfinstun, became rector of Kirkmichael at the age of twenty-five. He studied Civil and Canon Law in Paris, eventually becoming Professor of Law in that university. In 1484 he was appointed Bishop of Aberdeen and later Lord High Chancellor of Scotland, a post he held until the death of King James III of Scotland in June of 1489. In 1494 he was given a bull from Pope Alexander VI for founding the University of Aberdeen. He died in 1514. 16th Century & Anglo Scottish Wars. In the 16th Century during the Anglo-Scottish Wars a cousin of William Elfinstun called Sir Alexander Elphinstone led the Clan Elphinstone at the Battle of Flodden Field in 1513 where he was slain, fighting in support of King James IV of Scotland. Alexanders son also called Alexander too over as chief and led the Clan Elphinstone at the Battle of Pinkie Cleugh in 1547 where he was killed. The fourth Lord Elphinstone was appointed in 1599 as a judge of the Supreme Court of Scotland in 1599 and later Lord high Treasurer. 18th to 19th Centuries Jacobite risings & the Napoleonic Wars. A cadet branch of the Clan Elphinstone were the Lords Balmerino. They were staunch Jacobites and the sixth Lord Balmerino was captured after the Battle of Culloden and beheaded in August 1746. The eleventh Lord Eliphinstone was lieutenant governor of Edinburgh Castle. One of his younger brothers called George Keith Elphinstone was a successful and distinguished naval commander. In 1795 he was made vice admiral and commanded the fleet which captured the Cape of Good Hope and compelled the Dutch fleet to surrender without firing a gun. His reward was an Irish barony. He was later promoted to the rank of admiral, and created Baron Keith of Banheath, only to be advanced once more, to the rank of Viscount in 1814. William George Elphinstone, the Viscounts nephew was a Colonel and fought against the French at the Battle of Waterloo in 1815 during the Napoleonic Wars. Thanks for lo oking. All Antique silver items will show some signs of wear, which only adds to the history of the object….. Track Page Views With. Auctiva’s FREE Counter. The item “RARE ANTIQUE CHINESE ARMORIAL SCOTTISH CLAN ELPHINSTONE SNUFF BOX” is in sale since Sunday, September 8, 2019. This item is in the category “Antiques\Silver\Solid Silver\Boxes”. The seller is “silver_antiques_uk” and is located in United Kingdom. This item can be shipped worldwide.